Why I find posts about Guruji’s death triggering 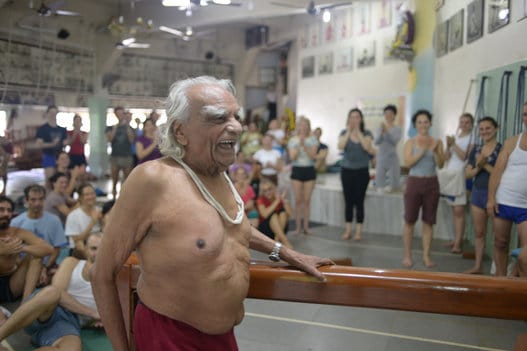 I was in a café with a colleague. We’d just finished our practice and were having our post practice brunch. A text came through. A huge shiver ran through both of us as we stared at each other across the table and then burst into tears. Although everyone in the extended worldwide Iyengar Yoga community knew Guruji was very sick, it was still such a jolt, such a shock.

I was riding my bike home from the studio after this when my Mum rang. I pulled over and before I could get any words out I just burst into tears again. “What’s wrong honey?” she asked. “Mr Iyengar just died” I replied. I managed to mumble some words to her about how, apart from herself, Dad (who had passed away), and my own senior yoga teacher, Guruji really was one of the most influential people in my whole life. And that I was crying out of gratitude for the legacy and influence he had on my life through his work.

I was lucky enough to visit Pune on a couple of occasions whilst Guruji was still alive and even though I didn’t really receive his teachings personally (he’d stopped teaching general classes by then), I’d been able to practice in his light & I felt enormous respect for his lifetime of work and legacy I had both directly and indirectly received.

Later that day, Mum rang back to check in on me. I remember her saying something along the lines of how in awe she was for the respect I had in Mr Iyengar and was there anything she could do? That was one of the last times I ever had a full conversation with my Mum. A few days later she went into a coma and a week later she too passed away…

Suffice to say whenever this time of year comes around, I find it difficult on a number of levels. I see all the yoga studios put up tributes to Guruji but although at the time I too was so filled with grief and gratitude for him, now, for me at least, it just reminds me of my Mum. And, to add salt to an already open wound, last year, in this same difficult week, my brother, just 18 months older than me died suddenly at the age of 50.

The last week of August really sucks…One I thing I do know for sure though, is that yoga came into my life to help me through all of this. And without Guruji’s work, I wouldn’t have my practice and the best, most authentic support system anyone could ever hope for: yoga.

And for that gift, I say, thank you Guruji.